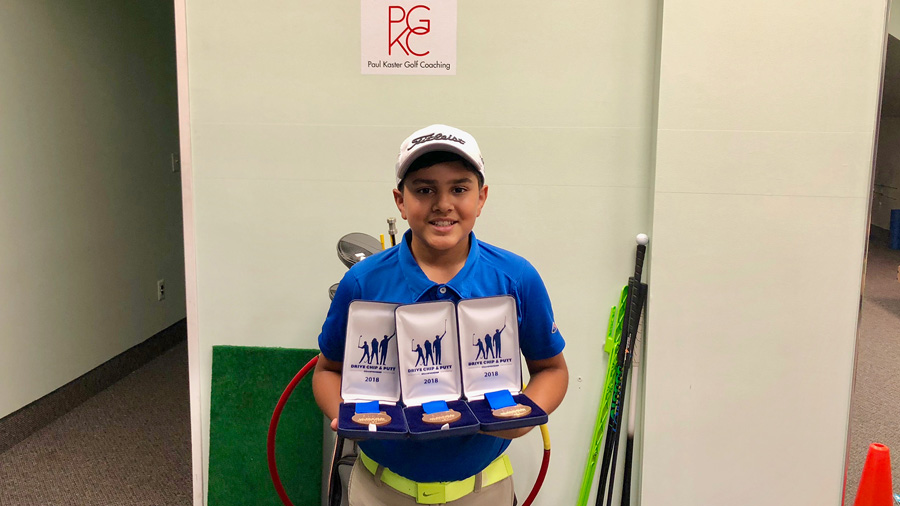 Posted at 08:00h in News by solariadmin

Ten-year-old Mihir Roperia of Cranbury, N.J., was one of eight young golfers to earn their way through the Drive, Chip and Putt Regional Qualifier at Congressional Country Club on Sunday, September 9th, punching a ticket to Augusta National Golf Club for the National Finals next April.

Roperia, a student of Golf Channel Academy lead coach Paul Kaster, overcame soggy, wet conditions at Congressional, winning the Boys 10-11 division. Roperia tallied 131 total points, placing first overall in the Driving (36 points) and Chipping (50 points) portions of the competition and sixth in Putting (45 points). His drives all flew around 175 yards — he didn’t get much roll because of the extremely soft conditions and he twice chipped within inches of the hole.

“He’s extremely excited,” said Kaster, who began working with Roperia two years ago at Kaster’s former club, Forsgate Country Club, in Monroe Township, N.J. (Roperia was a member of Kaster’s PGA Junior League squad.) “I was with him and his dad for two hours this past weekend and I don’t think I’ve ever seen him as animated. I feel very fortunate to share this journey with him.”

Both Kaster and Roperia’s father will be making the trip with Mihir to Augusta National for the Drive, Chip and Putt National Finals, which takes place on the eve of Masters Week. Contestants will not only get to boom drives on the same driving range the players use, but will also get to hit downhill putts on the famed 18th green where so many players, including Arnold Palmer, Tiger Woods and Jack Nicklaus, made history.

In preparation for the Qualifier, Kaster and the young Roperia spent a lot of time on the Foresight GC Quad Launch Monitor at Kaster’s new indoor teaching studio in Little Silver, making sure his clubs fit and he was getting the most distance out of his driver. They also spent a good deal of time working on his posture and putting. Kaster says that Mihir’s mental game and putting are his strong suits, although he struggled adjusting to the speed of the greens at Congressional. He’s also very comfortable chipping and pitching with his gap wedge.

“Mihir has a very well-rounded game and loves practicing,” said Kaster, one of Golf Digest magazine’s “Best Teachers” in the state of New Jersey, and a U.S. Kids Golf “Top 50 Kids Teacher” in 2017. “This past year he shot 31 (-5) for nine holes in a U.S. Kids Golf Local Tour event and rarely finishes outside of the top 2 on that tour. He’s a fierce competitor but a very well-mannered young man.”